Planning for a Prescribed Burn
in the Alphabet Hills

A flyer on the proposed Alphabet Hill prescribed burn, prepared to educate and inform area residents

ADF&G Division of Wildlife Conservation is working closely with DNR Division of Forestry and the Bureau of Land Management (BLM), to make sure all boxes are checked before applying fire to a remote area north of Lake Louise. The goal of the prescribed fire is to stimulate the regeneration of shrub and tree species that moose feed on, thereby supporting a healthy moose population into the future. Birds and small mammals will benefit too. As the fire burns a mosaic pattern across the landscape, vegetation types and age classes are diversified, providing more options for habitat. Succession of the boreal forest is a slow, gradual process. In the first few years following a fire, grasses, sedges, and herbaceous plants become established. Years later, shrubs like willow species root in; then come deciduous trees and finally spruce.

“We expect to see a real benefit to moose and hunters five to 15 years post-treatment,” said Sue Rodman, Program Coordinator. “That’s when browse species like willow, aspen, and dwarf birch should be well-established.”

The burn is planned for an area near the Alphabet Hills, a landscape mostly covered by late-successional black spruce forests which provides limited forage opportunities for moose. Since natural ignitions are rare in this area, prescribed fire can provide the disturbance required to invigorate the plants that are most important to moose by exposing mineral soil and stimulating seeds that lie dormant in the soil. 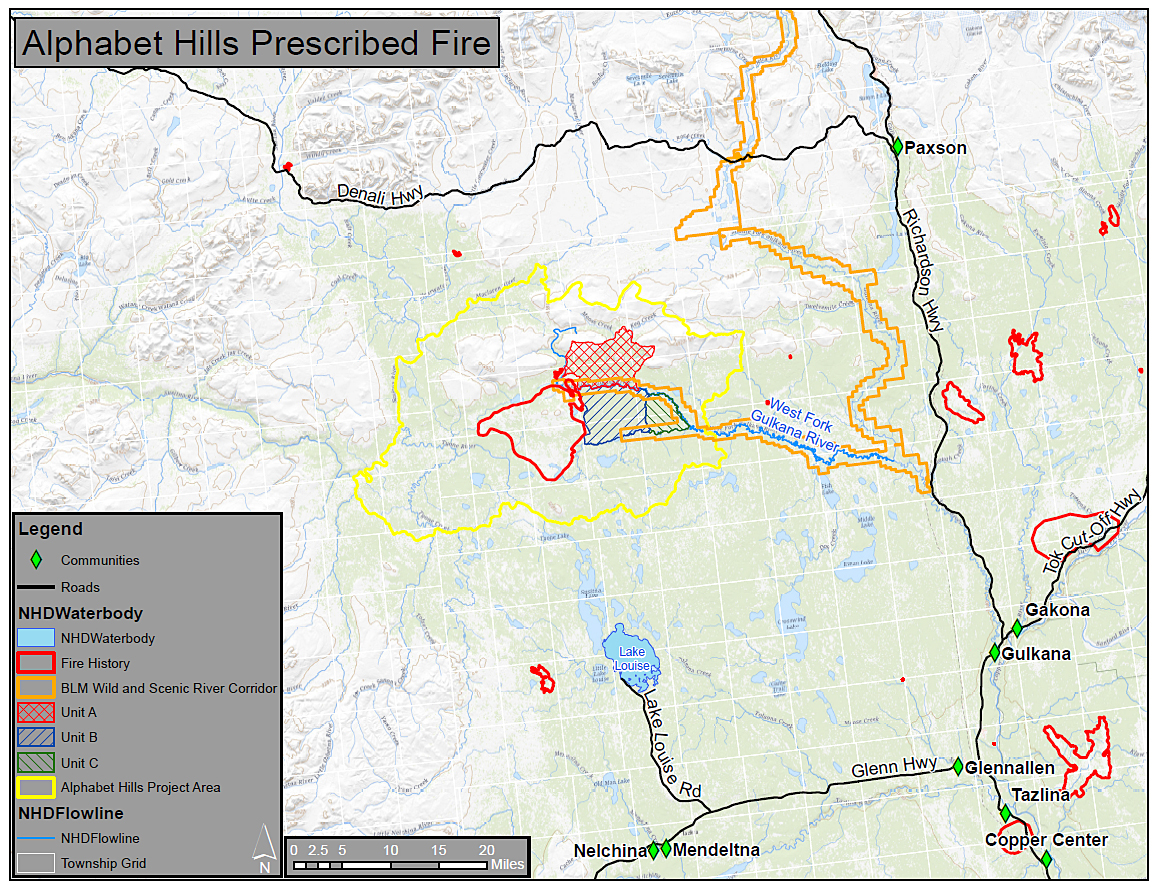 ADF&G previously coordinated a prescribed burn in neighboring burn units in 2004 (see map) and benefits from that fire can now be seen.

According to Wildlife Scientist Bill Collins plant regrowth is slow in this area, but willows and other browse species are now tall enough to remain available to moose above the snow through the winter.

“That’s a big deal,” Collins says. “Winter is a critical period when moose are under stress. They expend significant energy reserves walking through snow searching for food.”

In July of 2019, ADF&G biologists performed vegetation surveys in the project area. Moose had caused many of the shrubs to ‘broom,’ a sign that the habitat is limited in supporting any additional moose.

“Brooming negatively impacts both plants and moose,” Collins explains. “It not only stunts plant growth but often reduces its nutritional value.”

What is the status of moose in the area now?

The project area spans both Game Management subunits 13A and 13B. The most recent minimum count moose surveys for this area were conducted in 13A in the fall of 2018 and in 13B in the fall of 2019. Moose abundance indices are derived annually based on these surveys. The moose abundance index in 13A was above the objective from 2011 through 2015 and remains near the upper end of the objective (3,500 – 4,200), averaging just under 4,000 moose in recent years. The moose abundance index for 13B peaked in 2015 around 5,100 moose (just below the population objective of 5,300-6,300 moose), and in recent years, it remains steady but below objective, averaging roughly 4,000 moose. Over the winter of 2020, the area received considerable snow, but so far biologists have not seen evidence that moose suffered substantially on this side of Unit 13.

What are the steps to plan a prescribed burn?

The Alphabete Hills are landscape

Rodman is orchestrating the Alphabet Hills prescribed fire, and as expected, there are many factors to consider. Prescribed fires require a defined set of documents and studies to be completed on behalf of state and federal regulations. First, a comprehensive plan that follows the guidelines provided by the National Wildfire Coordinating Group is established.

“This plan ensures that consideration is given to safety, smoke, fire behavior, and several other factors to support a successful burn,” Rodman said.

With the Gulkana Wild & Scenic River Corridor running within the burn units, the BLM is required to complete an environmental review in compliance with the National Environmental Policy Act. BLM and Alaska’s State Historic Preservation Office review cultural resources within the project area to assess historical sites and determine if mitigation actions could help protect them from the prescribed fire. DNR reviewed the project to issue a land-use permit to ADF&G to burn these mostly state lands.

“All along the way, we communicate with local community councils, business owners, and residents,” Rodman said. “We want to properly prepare folks and avoid surprises because after all, this project is to benefit the public, wildlife, and natural resources of the area.”

Logistics must be coordinated with the Alaska Division of Forestry and BLM to ensure a smooth operation. Hunters and other recreational users must be notified so they are aware of potential burn windows to adequately plan their summer and fall trips.

With that in mind, Rodman anticipates concerns and answers some frequently asked questions about the implementation of the fire and its potential impacts. Please read the following and direct any other questions or concerns to Sue.Rodman@alaska.gov.

Ignition is planned for 2021. Along with the weather, resource availability and fire activity in the state are considered before igniting any prescribed fire. While the ignition process may only take a few days, smoldering may continue for several weeks afterwards. Smoke may impact recreational users within the vicinity weeks later. It is important that all potential users of the area are aware that the burn may be ignited during the summer of 2021 or in following years so that travel plans can be accommodated. All users will be asked to vacate the project area prior to ignition to ensure public safety. ADF&G will expand its outreach in the months prior to the potential ignition.

FAQ 2: How will the fire be contained?

The primary burn units that make up this project total about 53,000 acres. There are other units mapped out that may be burned pending the weather and winds. We will use existing water bodies to limit fire spread. All boundaries are in alignment with various water features across the landscape, topographic features where fire behavior may be reduced with firing techniques, and high elevation areas with little vegetation to sustain a fire. In this remote setting, it will be important to monitor the fire’s activity after ignition. Because of the water features in and around the units, it will be difficult for fire to move north or south. The burn prescription also calls for a southerly wind during ignition. This will help move smoke and fire to the north, away from people, homes, and the Glenn Highway. An aircraft will be flown to monitor the burn in the days after ignition and will fly regular patrols in the weeks after the fire to ensure all ‘smokes’ are noted by the Division of Forestry. Project staff will be communicating with local fire departments at Lake Louise and Glennallen. The perimeter of the project area is 11 miles north of the community at Lake Louise over lakes, ponds, and streams. It is 14 miles south of the Maclaren River’s intersection with the Denali Highway over rivers and mountains. While the fire is planned to burn only the designated units, any breach of the project area perimeter will be addressed by fire suppression resources.

FAQ 3: Will the smoke impact residents and businesses?

Smoke management can be a challenge. Project managers will follow DEC’s Open Burning Policy & Guidelines to minimize air pollution and avoid creating a public health hazard. Air quality will be checked before the burn to establish baseline levels of particulate matter so that smoke impacts from the fire can be detected immediately.

With the large size of the project area, there will be smoke visible from several vantage points including Lake Louise, Glennallen, Paxson, and the highways surrounding this area: Denali, Richardson, and Glenn. Our goal is to communicate with the surrounding communities and businesses to notify residents and visitors about the project so that visible smoke will not cause alarm. Under certain conditions smoke may blow into some communities or settle into others. We anticipate this will be temporary because of our planning.

An aerial photo of the Alphabet Hills survey mosaic in winter

With the required southerly wind, smoke is expected to travel north, away from people. Fire managers will be in contact with both the State Department of Environmental Conservation (DEC) and the National Weather Service to track weather before, during, and after ignition. Smoke forecasting is done the day before the burn and just before ignition to confirm that current and predicted winds will carry smoke in the intended direction. The ignition period must have certain weather conditions to allow fire managers to start the burn. We will also look closely at the forecast for the days after the fire is lit. A wetting rain will help reduce smoke output as the fire burns out. If winds are forecast to direct smoke into communities after ignition has taken place, we will notify community officials and media outlets immediately so that individuals sensitive to smoke can take precautions.

Considering the Denali Highway, recreational users, campgrounds, and businesses between Paxson and Cantwell will also be notified of the project prior to ignition and to the extent possible, if smoke travels north into this area.

FAQ 4: How will the prescribed fire be ignited?

Firing, or ignition of the burn, is expected to take place over several days with a helicopter outfitted with a plastic sphere dispenser. Ping-pong sized balls filled with potassium permanganate are injected with glycol and then expelled from the machine and the aircraft. The resulting exothermic reaction (small explosions) ignites ‘fuels,’ or dry grass and plants, on the ground to initiate the prescribed fire. The helicopter operation uses wind and topography to maintain heat and keep the fire moving. Although somewhat complex, the small operation requires one helicopter with a few key people in the air and several stationed on the ground for support and monitoring.

Please direct any other questions, comments and concerns to: