The sonar site is 12 miles upstream of the mouth of the Aniak River and consists of two sonar-counting stations located across from one another. At each counting station a sonar transducer is submerged near the bank and a canvas tent houses equipment used to receive data from the transducer.  The sonar site’s main camp and primary counting station are both located on the river’s east bank, also referred to as the right bank.

The Aniak River drains from the Aniak Lake basin, flowing about 80 river miles northward before emptying into the Kuskokwim River one mile upstream from the community of Aniak. The Kuskokwim River is the second largest river in Alaska, draining an approximately 51,000 square mile area or 11 percent of the land area of Alaska. The river drains from the northwestern slope of the Alaska Range, flowing approximately 930 river miles westward to Kuskokwim Bay where it empties into the Bering Sea.

The Aniak sonar site is 201 river miles from the mouth of the Kuskokwim River. At the sonar site, the Aniak River is characterized by broad meanders, large gravel bars and cut banks with exposed soil, tree roots and snags on the outside bends. Between the two sonar-counting stations, the river flows through a single, 230-foot-wide channel and over a bed of fine gravel, sand and silt.

Why ADF&G chose this site location

ADF&G located the sonar site at mile 12 of the Aniak River because it is within close proximity of Kuskokwim subsistence and commercial fisheries yet far enough from the mouth of the Kuskokwim River to avoid Kuskokwim Bay tidal influences. Chum salmon migrate from the upper end of the District 1 fishing area to the Aniak River sonar site in seven to eight days.  Also, at River Mile 12, the riverbed is stable, changing little over time. And because the river flows through a single-channel at this location, all migrating salmon pass between the site’s two sonar transducers. 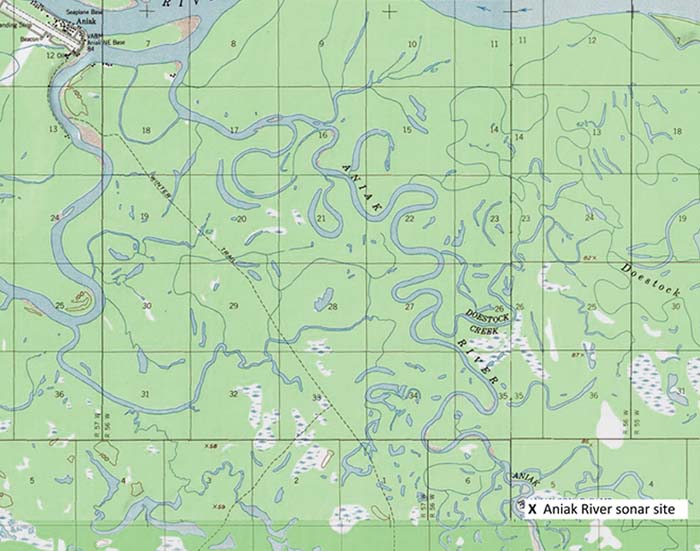